You must:
(1) verify that the public key listed bellow really belongs to me (why?)
(2) Sync your keyring with a public key server in order to receive updates about my key (why?)

We'll start our explanation of PGP by explaining basic cryptographic concepts. The explanation is very basic, and meant to give some notions about cryptography to readers that have never heard of cryptography before. If you already know a thing or two about general cryptography, you can skip this part.

In order to explain the basics of cryptography, we will use a fictional situation and fictional characters. Imagine the following situation:
We have two persons: Alice and Bob. Alice knows Bob, and Bob knows Alice. They actually know each other very well: they are a couple and they're madly in love.
There also is a third person: John. Alice, nor Bob know John. John is an evil person who is in love with Alice. John can't stand that Bob sends messages to Alice, and John wants to read every message that is sent to Alice.
Imagine John is able to eavesdrop and manipulate the internet connection of Alice. John is therefore able to see every message that is sent and received through the internet connection of Alice. 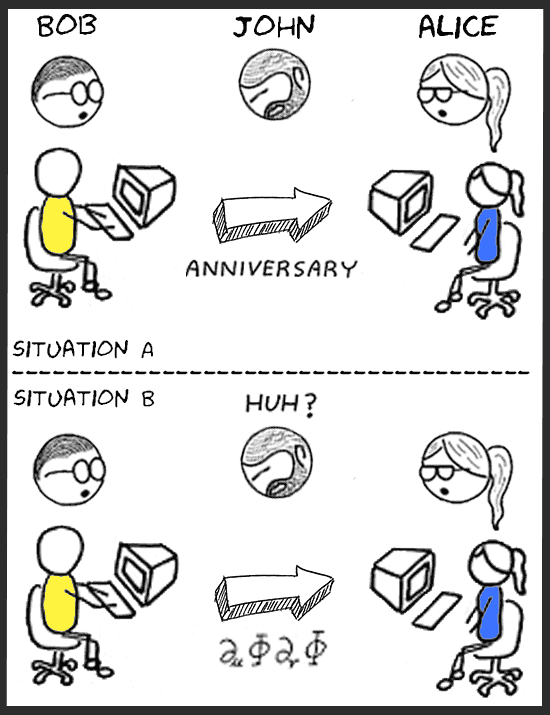 Picture 1: Bob sends an unencrypted and an encrypted message to Alice

In the next paragraph, public keys are explained with the help of our characters Tommy and Joe. Don't worry, we will back with Alice and Bob soon!

When two persons want to exchange encrypted messages, they can use either symmetric or asymmetric encryption to encrypt/decrypt their messages.

When both persons use a symmetric encryption algorithm to secure their messages, both persons should already possesses the (same) symmetric key. When only one of the two persons possesses the symmetric key, the key owning person could send the other person the key, but that is not a good idea given the fact that the message containing the key could be intercepted. (Remember: we assume that all communications can be intercepted, this assumption made us use encryption to exchange messages in the first place!).
Picture 2 (left) illustrates an example where our characters Tommy and Joe use symmetric encryption to secure their messages. Tommy and Joe should already have agreed on a symmetric key before sending their messages via the internet (e.g. by discussing the key in a real life conversation that nobody else can eavesdrop on). 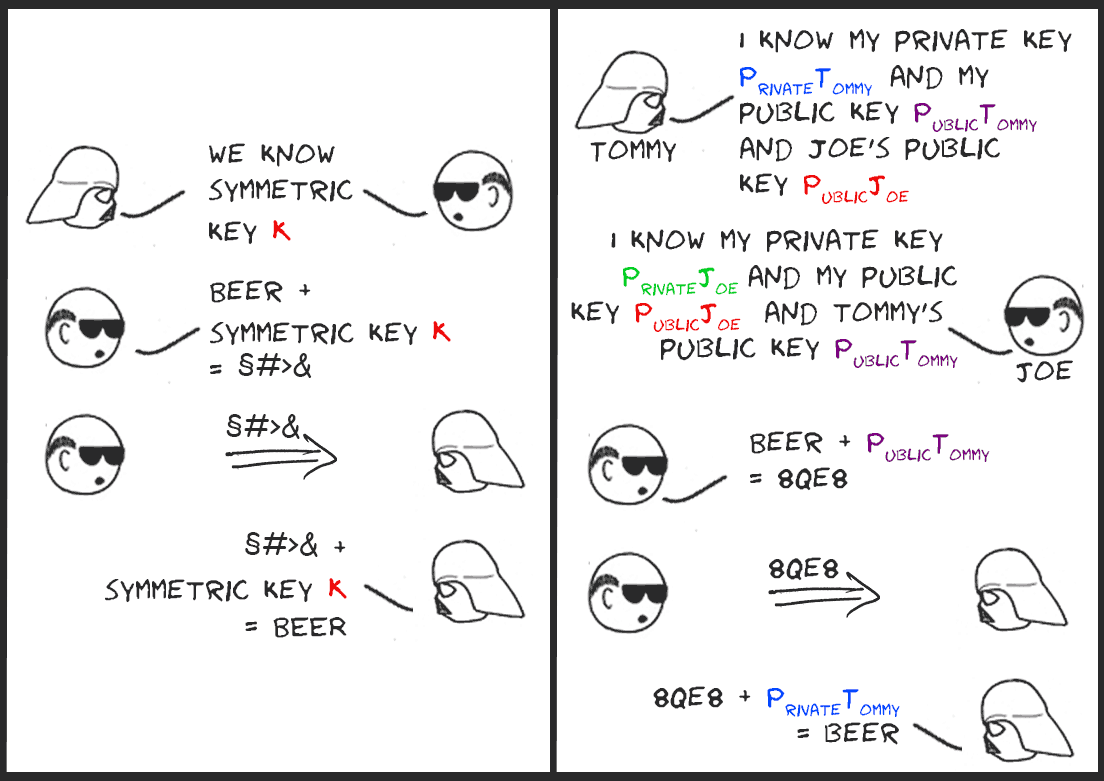 When Bob uses Alice's public key to encrypt his message, John can't make sense of the encrypted message. This situation is illustrated in picture 3 (situation 1).
John however is a smart man, and realizes that if Bob encrypts his message(s) to Alice using John's public key, he is able to derive the plaintext. John can trick Bob in using his public key by changing the displayed public key on Alice's website (we stated in the first paragraph that John is able to manipulate the internet connection of Alice, thus John is also able to take control of Alice's website). 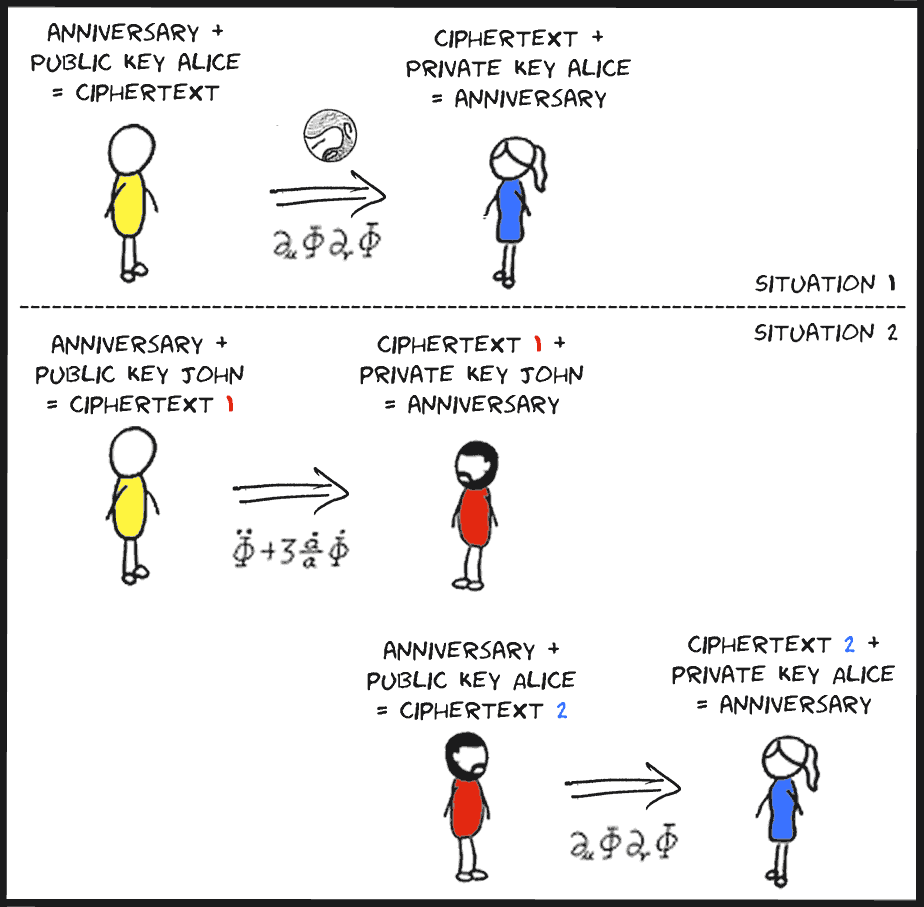 In the next paragraph, we will explain how the trust that you have established the correct key can be increased (i.e. how can Bob be more confident that Alice's public key really belongs to Alice, and not to John).


A commonly used method to prevent the forgery of keys is the signing of keys. Signing is used for demonstrating the authenticity of a digital message or public key. In the public keys paragraph we stated that in public key cryptography one can encrypt a message with the public key of the message recipient, and decrypt a received message with his/her private key. Signing is actually the same as encrypting, with the difference that in signing the user encrypts the plain text with a private key instead of encrypting the plain text with a public key. The process of encrypting a digital message/key using a private key, with the purpose of demonstrating the authenticity of a digital message or public key, is called signing. Even though signing and encrypting both transform a plain text into a cipher text using a certain key, signing is not called encryption, to denote the difference in use of the public and private keys in the encryption process. The private key used for signing a message differs from the private key used to decrypt a message. Two communicating parties will thus each have a key pair to encrypt/decrypt and a key pair to sign:

Bob can ask one or multiple trusted parties to sign his public encryption key. The parties (e.g. Legolas and Aragorn) will sign Bob's public key using their private signing keys. A third party can verify the signatures using Legolas' and Aragorn's public signing keys. When Alice receives a forged public key, she will notice this because the key will not be signed by a party that is trusted by her. This situation is illustrated in picture 4. 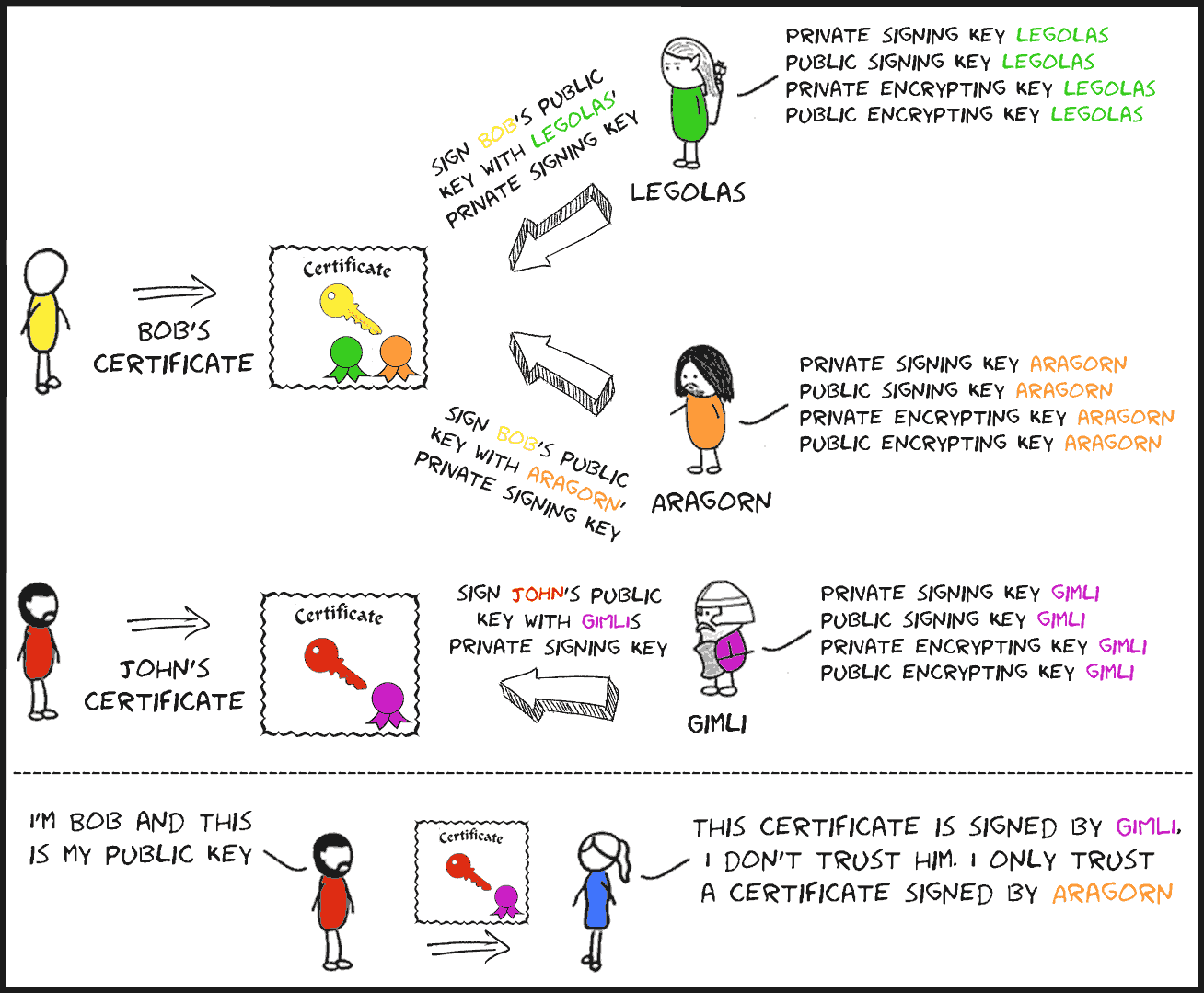 Picture 4: Bob and John get their public keys signed. Alice only trust signatures from Aragorn
and will revoke public keys that aren't signed by Aragorn.